There are two different types of shifts that happen during the squat. The first is when the person is moving side to side while descending into a squat. This tends to be a flaw in the technique where one fails to keep tension in the lumbopelvic region and it looks like this:

(yes, that’s me from earlier in the year and yes, that’s my shorts being eaten by my buttcrack)

The other squat is when a person squats and they tend to favor one side which looks like this:

What we are going to discuss is the latter version where we tend to favor one side. It’s an asymmetry without a doubt but is it a cause for concern? In the grand scheme of things, I would say that it is not ESPECIALLY if it’s small(larger asymmetries can hinder performance) and let me explain why.

As human beings, we move differently and this is in large part due to the variation in our anatomy. We’ve seen differences in the hip anatomy through cadaver studies whether it’s in the hip socket, the femur bone or a combination of both.

(photo credit to Ryan Debell of The Movement Fix) 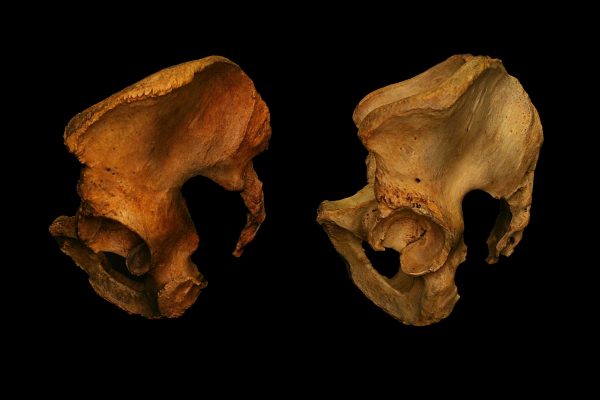 This is already an indicator that individuals will tend to squat differently. People with retroverted hips typically prefer a wider stance while people with anteverted hips will adopt a narrower stance(see below): 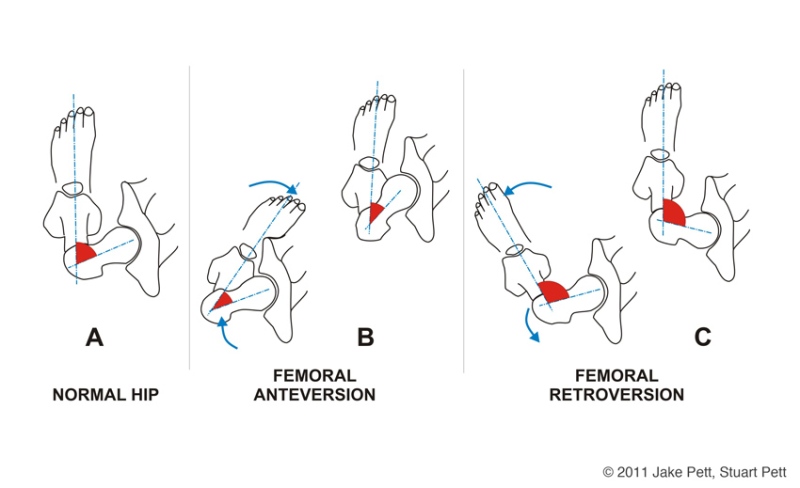 I know those differences would not be able to account for an asymmetry. Now, we’ve seen research to show that your hip anatomy can vary from left and right.1 The differences in the range were anywhere from 0.2 degrees to 17.3 degrees which is quite significant.1 This leads me to my point that shifting in the squat is completely NORMAL especially when trying to place symmetric loads on asymmetric structures.

(photo credit to Ryan Debell of The Movement Fix) 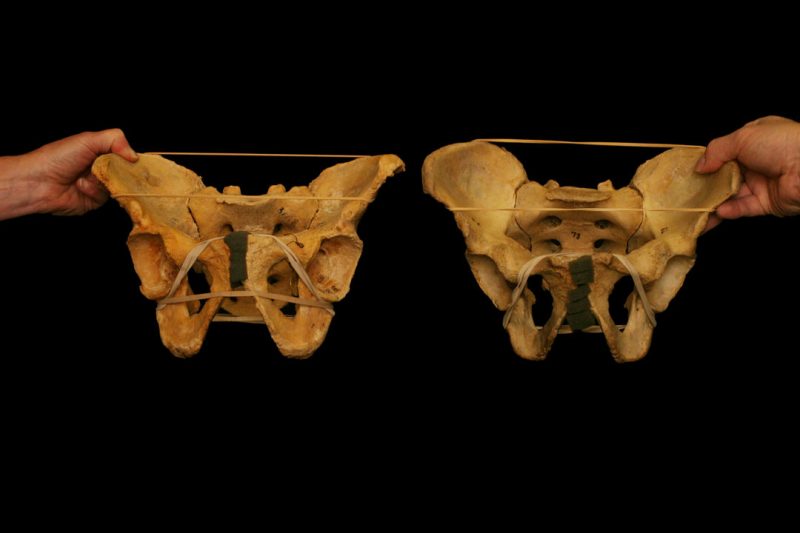 Another factor that comes into play is leg length discrepancy and research has shown that it may be more common to have one than NOT to have one.2 This is another rabbit hole to dive into determining whether the discrepancy is due to structural(bones) which we cannot change or functional(muscle length).2 If there is a longer leg present, the squat will shift towards the longer side as it needs to go into a deeper hip internal rotation during the descent so that the bar and pelvis stay level during the movement.

Are we doomed? Not at all. The great thing about being human is that our bodies adapt. When stress is placed on our body, the tissues(muscles, ligaments, tendons) will remodel to become stronger. We have the Wolff’s law for bones and Davis’ law for soft tissue which explains how our body adapts to the imposed demands placed on it. This prepares the body for it’s next encounter to that same stimulus. Subsequent exposures to that particular stress(in this case, the shifted squat) will gradually increase the tolerance of your body to the movement. 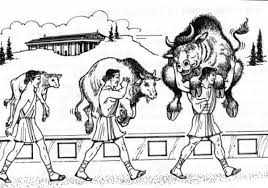 “So…what you’re saying is forget form and keep squatting?” Kinda but it always DEPENDS(context is king). If we can clear the range of motion, motor control and other factors that could potentially influence the shift in the squat then we need to finally take into account the person in front of us. People have certain variations in their bone structure that could potentially lead to different movement patterns and this isn’t a cause for concern. Asymmetries can exist and our bodies can adapt. The key is to keep the asymmetry to the minimum so it does not potentially hinder our squat performance(losing balance/control).

If we apply this clinically, let’s say a patient is experiencing right sided glute pain while squatting. We look at the pattern and we see that the patient has a slight shift to his right side during the squat. Ding ding, you’ve got the answer? Let’s slow down a bit. If we know that shifting to one side of the squat is a pattern that could potentially be adapted to and may be natural due to the anatomical structure then is this patient having a biomechanics problem, a volume management problem or is it BOTH?

Well, it could go a variety of ways. First, we need to assess the person’s range of motion. If that is cleared then check motor control under different loads. Is the person able to squat symmetrically with their body? How does it look at 50% of 1RM, 60% of 1RM, etc? If you’re training at 80-90% of your 1RM and still maintaining a relatively symmetric squat but your hips start to shift after those %’s then it’s a motor control(these are numbers are arbitrary, you can plug in anything depending on the context of the situation).

If the form is relatively uniform throughout all the percentage ranges then we may have to appreciate the asymmetry that could be present within the individual. We can spend months trying to re-pattern the squat but we might be trying to fix a problem that might not be there especially if the underlying cause is structural. 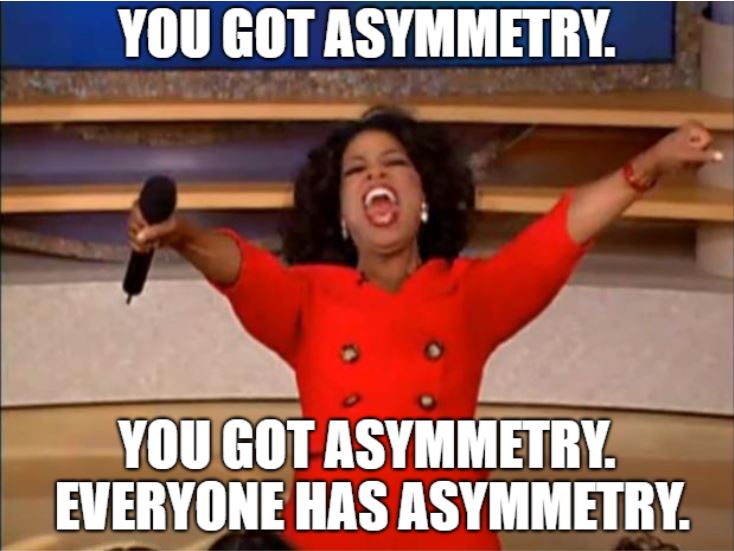 Asymmetry is evident in life and often gets labeled as dysfunctional. This creates kinesophobia(fear of movement) when people begin to label variable ways to moves as poor or detrimental. Our body is capable of being resilient in a range of positions and shifting in a squat is one of them. Remember that any movement can be harmful if the volume and intensity exceed what the person is capable of handling. This concept is evident in the acute:chronic workload literature.

Still not convinced that it might not be safe? Let’s break it down logically. If you were performing a side lunge only to one side, would that cause you to have pain just because you weren’t working the other side? Most likely not. Asymmetric loading is normal and asymmetry in the anatomy is normal as well. 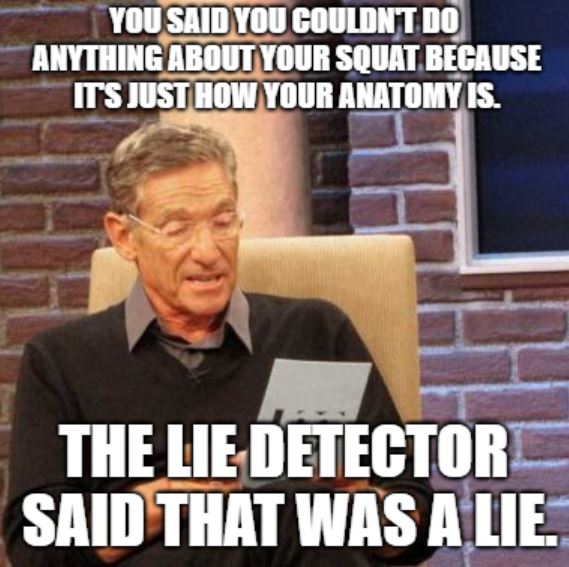 What can we do? Clear range of motion and motor control. Minimize the asymmetry so it does not hinder our squat performance. Make sure we are training smart in regards to volume, intensity, and recovery. POTENTIALLY change our stance to accommodate the differences between the R and L hip but I think the latter options are more viable(a friend of mine had recently brought to my attention that Dean Somserset changes his deadlift position to accommodate his hip variation so just a thought).

If you’ve got any questions or want to discuss anything pertaining to the topic, always interested to hear the perspectives of others and engage in thoughtful conversations.